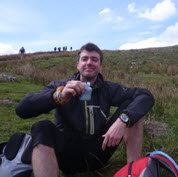 My name’s Warren and I’m hopelessly addicted to the Fellsman. The story goes something like this…

The year was 2009, I had just run the Marathon des Sables and thought I knew what this ultradistance business was all about. So when the Mail on Sunday magazine called and asked if I’d like to run the 103-mile Ultra Trail du Mont Blanc (UTMB) for a feature at short notice I cheerily said yes. Fifty mountain miles later, delirious, battered and shambling into the halfway aid station at Courmayeur in the Italian Alps, I had to concede I actually knew nothing. I pulled out a broken man and it would be another two weeks before I could walk down stairs forwards thanks to quads that felt like they had forks stuck in them.

Which brings me to the Fellsman. Because during my UTMB ‘prep’ (a six-week crash course in overtraining, getting ill and plantar fasciitis), I met a bloke who’d run it as part of his UTMB training. He had finished both that and the Fellsman, and of the latter told me, “it’s quite tough”.

This was of course classic Northern understatement, not that I knew it at the time. Regardless, the comment stuck and became an itch that needed scratching and so in 2010 a mate and I made the drive up from London for our inaugural Fellsman experience. Said mate – a several-time decent Ironman finisher – was wary, but the free pie and pea supper before race day swung the deal for him.

We left town too late, arrived at Wharfedale school too late, and were still faffing with our kit and marking maps until 2am. Looking back, we may have been the most screamingly obvious non-finishers in the race’s long and illustrious history.

Yet despite this inauspicious start, the Fellsman was worming its way under my skin thanks to a charm many races lack and a brilliantly honest challenge. Where too many events now scream about how tough they are only to follow up with something about as taxing as an egg and spoon race, the Fellsman quietly ignores them all and gets on with being genuinely difficult without needing to yell about it.

So 2011 saw me back again to sample the delights of Fleet Moss and Middle Tongue for the first time. I remember a lot of misery up there that night, coupled with several falls into bogs deep enough to lose a car in, not to mention a distinct feeling I may never find my way out. Yet somehow, despite a dodgy ankle hobbling me by Park Rash, the memory I took away was that I’d had a brilliant time. Clearly some sort of covert voodoo mass hypnosis is involved during sign-on at the Fellsman, because this perfectly selective memory loss seems common to everyone who enters.
[cryout-multi][cryout-column width=”1/2″] 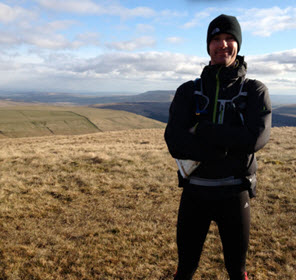 Enjoying the splendid views across the fells.

[/cryout-column] [cryout-column width=”1/2″]
Lost for hours in a hailstorm on Middle Tongue?

Been plunged in and out of the mental abyss all night while teetering between hysteria and madness and simultaneously developing a rare new stream of trench foot?

“Best race ever, can’t wait for next year!”

And so it goes on. But this is the beauty of the Fellsman and it’s what’s kept me coming back, finally for a finish in 2012 (a bit windy if I remember rightly, ice crystals in my socks at Park Rash were a particular highlight) and a night marshalling the Hells Gap checkpoint in 2013 (which taught me the event staff are every bit as tough as the runners) after injury scuppered my actual running plans that year.
[cryout-multi][cryout-column width=”1/2″]
Every year has brought new lessons, from kit preparation and planning, to how to sleep for five minutes in a food tent the size of a wendy house when the wind’s threatening to hurl it skywards like the house from the Wizard of Oz. And every year has left me with an ever bigger smile on my face afterwards.

For 2014 though work has me stuck in deepest Canada on Fellsman weekend so I’ll just have to wait until 2015 for my next fix, but for the rest of you lucky buggers this year, have a great one. I’m as jealous as hell.[/cryout-column] [cryout-column width=”1/2″] 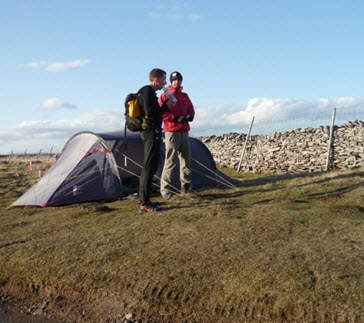 Enjoying the chance to chat to the entrants whilst working on the Hell Gap checkpoint.

PS: nearly forgot, quick plug – I run a natural sports nutrition company for endurance athletes called 33Shake. Three of us started it as we were fed up with the cheap junk on the market and felt athletes were being sold short – 33Shake is our way of righting that balance. We’re at www.33shake.com if you’d like to check us out.