The Fellsman » Articles » The 2013 Grough Report by Bob Smith

The 2013 Grough Report by Bob Smith

The following is the The Grough Report for the 51st Fellsman in 2013 written by Bob Smith, Editorial Director of Grough (www.grough.co.uk). Reproduced here by permission of Bob Smith. All photographs ©Bob Smith and reproduced with permission.

The prolonged winter must have troubled the organisers of the Fellsman, the gruelling 98km (61-mile) challenge that sees hundreds of runners and walkers attempting to complete a large horseshoe route in the Yorkshire Dales. The 2012 event was abandoned for the first time as relentless strong winds and sub-zero temperatures led to many competitors becoming hypothermic and confused as a result of ‘wind-blindness’.

Two weeks before last year’s event, safety officers ran a recce of the fells over which the route passes and found substantial amounts of snow still lying on the eastern peaks of Buckden Pike and Great Whernside. It was enough for safety officer Chris Hughes to remind runners and walkers that the mandatory kit list was a minimum required and, if conditions dictated, ‘hikers’ as the entrants are still quaintly called, should carry extra clothing.

“The fact we still have snow on the route in mid-April, it is only right that we remind entrants that the kit list is a minimum requirement, and that this, as always, will be rigorously enforced both at kit check and en-route. Please bear in mind that any entrant, runner or walker, could find themselves stranded in an exposed location and therefore the clothing carried or worn should be adequate to keep you sufficiently warm. We know you will think long and hard about the kit you are taking and we understand that weight is an issue for many of you but your safety is always paramount. Hopefully the snow will have all but have gone and I am confident that the event will run as normal.” 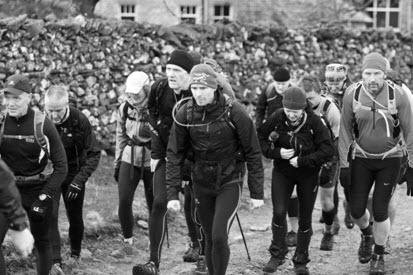 The entrants begin the first long pull out of Ingleton

On the Saturday morning, competitors travelling to the start at Ingleton lifting their gaze would see their first fell, Ingleborough, dusted with a covering of snow. And the wind was up. Five minutes after the scheduled start time, 402 hopefuls ran and walked out of the village and up Fell Lane. Only three-quarters of them would make the finish at Threshfield in Wharfedale. But this year, there would be no 2am abandonment of the event.  If the weather was an uncertainty, it was beyond doubt a new name would be on the Fellsman Axe, the trophy presented since 1962 to the first to the finish. Jez Bragg, winner of the previous two Fellsman events, was absent, still recovering from his mammoth 53-day completion of the Te Araroa Trail, down the whole length of New Zealand. And the former Mr Fellsman, Mark Hartell, 11 times a winner of the Keighley Scout Service Team-organised event, was absent from the list of starters.

The massive organisation behind such a big and long-established event is often acknowledged by participants, and the event has long had a reputation for friendliness and sometimes quirkiness. The ‘body bus’ drivers who pick up runners and walkers who have dropped out traditionally wear fancy dress, which must be a near-hallucinatory experience for exhausted competitors. This year’s collection was a mixture of superhero and transvestism. And the equally traditional round plastic tally that is clipped at each checkpoint was this year supplemented by an RFID chip, with a bizarre assortment of whacky noises rewarding hikers as they swiped their tallies. As ever, the radio control that links checkpoints, safety officers out on the roads and sweep teams out on the hills, was a lonely little collection of caravans and antennae on Cam High Road, the old Roman road linking Wensleydale and Ribblesdale.

By Kingsdale, just over 12 miles into the event, 11 participants had already dropped out. And pity poor Chris Cash who managed to cover more than 50 miles before finishing the event at Park Rash above Kettlewell, just two checkpoints short of the full Fellsman. At the head of the race, two mountain marathon buddies were running together after overtaking early leader Kim Collison on the stretch following the Fleet Moss checkpoint on the ‘return leg’ down upper Wharfedale. Adam Perry and Ian Phillips would run side-by-side until the very last section of the race where the 25-year-old broke away to come in just ahead of Phillips who repeated his second place of last year, one minute behind his companion after more than 10½ hours of running. 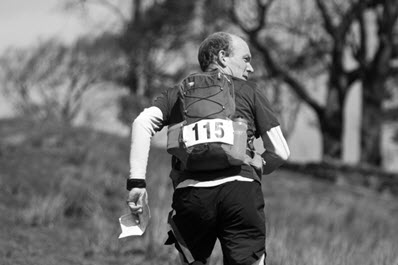 Collison, (pictured) with no prior knowledge of the route, came in third with a time one minute short of 11 hours to take the novice’s Tregoning Cup. Nicky Spinks, carrying the number two this year, improved her overall position, finishing 14th as the first woman with a time of 12hrs 36mins, almost an hour quicker than in the 2012 event.

Perry said his strategy was just to enjoy the race. He and Phillips set out to have a good time, he added – a mission accomplished. The Sedbergh-based runner was on home territory – he works for the Yorkshire Dales National Park Authority – and was in training on the hills since November.

“You’d think you would get lots of recce-ing done, but there’s always something else,” he said. “We [Phillips and Perry] ran loads of it together and it was only because he was stubborn that we didn’t finish together,” Perry added.

Phillips said: “He wanted to, but I said no, because he was stronger than me.”

He said he found the ‘painful day’ twice as hard as the previous years and admitted to being under par.

“I gritted my teeth all day today but I’m dead pleased with my performance. The conditions were far better. It was windy in the morning but for the rest of the day it has just been lovely sunshine and perfect to be honest. I think I’m fitter than last year, but Adam was stronger than me all day, really. He was gliding whereas I was fighting it all the time.” 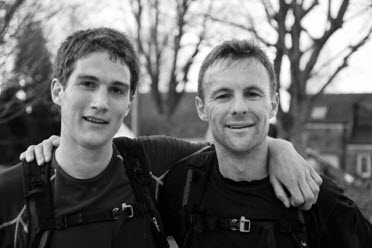 As the fastest runners rested their weary feet, out on the fells of the Yorkshire Dales, the runners, walkers and hundreds of checkpoint staff and other volunteers continued into the night and Sunday morning. There was no repeat of the ill winds of 2012 and a relatively benign night saw more than 300 people finish the event.

Final man home was Brian Finlay, who arrived at the Threshfield base in 303rd place, 27 hours and 22 minutes after setting off from Ingleton.

As victor Adam Perry said: “If there was one event I could ever have won, this was it. You don’t win it by chance; you have to put everything in.”