Now in its 53rd year, the Fellsman continues to be an iconic event on the tick list of many long distance fell runners and walkers, taking place this year (2015) on 25th April.

Covering 61 miles, the Fellsman is a demanding event over the hard rugged moorland of the Yorkshire Dales. Climbing over 11,000 feet on its horseshoe shaped path from Ingleton to Threshfield away from any well-defined footpaths. Taking you up Ingleborough and Whernside, two peaks from the famous Yorkshire Dales Three Peaks route, down into the picturesque dales village of Dent. More climbing follows including the summit of Great Knoutberry, then test your navigation over Fleet Moss to yet more climbing up Buckden Pike before finally dropping into Grassington with a welcome finish in Threshfield.

The Fellsman attracts runners and walkers of all abilities, from those just wanting to enjoy a big adventure in the beautiful Yorkshire countryside, to the more speedy athletes who will be watching the clock trying to beat their previous time. Gemma Bragg had already completed a number of ultra-running events, but in 2014 she would attempt the Fellsman, with the added challenge of navigation! She shares her Fellsman adventure: 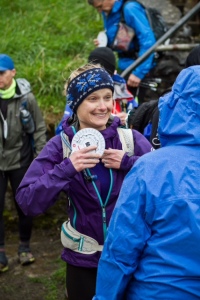 Waiting for the off…

I remember going to watch the Fellsman in 2012 and had said it wasn’t a race I thought I could do, one major issue being my poor navigational skills and also my strength across moorland. The year I went to watch there was a very strong Northerly headwind and quite serious weather conditions, late into the night the organisers had to make the very difficult decision to unfortunately stop the race due to the safety risk of participants. The quicker runners had made it to the finish but there were many that had to be transported back from various points around the route. I definitely didn’t think I would be back to race myself, and yet 2 years on there I was toeing the start line!

When a challenge is put in front of me I find it hard to resist and perhaps subconsciously in 2012 a seed had been sown that one day I would complete this epic 100km journey across the Yorkshire moors. I was also running the UTMB later that year in August and I thought the Fellsman would be a brilliant build up race and it was a good time of year being at the end of April.

The Fellsman really is an ‘old school’ kind of race, which is one of the attractions and reasons why so many people do the event year after year. We arrived in the early hours, I think about 6am, signed in and collected the chip card, which has to be with you for the entire route making sure you get every point chipped otherwise risk disqualification. Everyone assembled in the hall of our meeting point; it was too wet and windy to wait outside. I can honestly say that the morning of the Fellsman was the most nervous I have ever been, even having completed the UTMB at the end of last year the nerves I had at the start of the Fellsman are still the worst I have known. 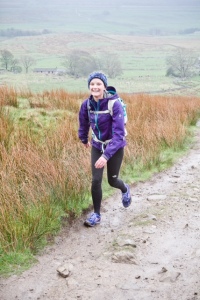 I think the main nerves just came from my fear of getting lost somewhere on the moor, as I previously mentioned I really don’t have any navigational skills! I was just hoping that I would tag onto someone that had done the route before or at least knew how to follow a map. There are a lot of runners so you think this would be likely, but there is always a chance that as the field spreads out over the hours you get left stranded. The good thing with the Fellsman though is that when night falls you are grouped (safety in numbers), so all I had to do was make sure that I kept someone in sight until nightfall and I would be ok!

I remember the first climb of the race being pretty tough and the descent feeling even tougher. The weather had come in and when I reached the top of the first climb I could hardly see a few yards in front of me due to the fog. It was windy and wet which made the descent extremely slippery with lots of loose rocks and I did question what I had let myself in for at this point. As we descended over the other side the weather settled and actually for the remainder of the race stayed settled, we were very lucky! It always takes me a little while to get into a race, to get my legs going and my mind focused on the journey ahead, but once my mind and body had settled in I began to really enjoy the ‘Fellsman experience’. The race is so friendly, there are volunteers at each check point doing an amazing job of keeping you chipper and feeding you with homemade flapjacks, custard creams, sausage rolls, bread and jam, hot soup, pasta, tea…… I would say that I am a ‘little & often’ kind of person in terms of my fuelling strategy during a race, but whether it was the cold or the type of terrain, I found I was consuming a lot more during this race then usual; the hot soup and bread just before nightfall was a dream! 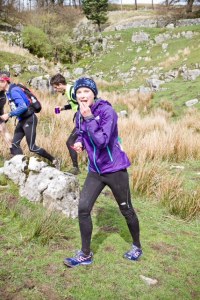 I kept moving well during the race and started running with a chap about 50km in, he had not raced the Fellsman before and was not very good at map reading either, but at least there were two of us! We then joined another 3 chaps, none of whom had raced this route before, but one was confident with his map skills. As it turned out I ended up running with them the rest of the way and we automatically got grouped together for the night section, they were a friendly bunch and good company but I think it was a bit unlucky that we were all novices of this race! Navigating the moors is difficult because a lot of the terrain looks the same and especially at night the landscape seems to merge into one making it very hard, needless to say we did go astray on a few occasions. We all worried that we would never find the next check point as we waded off course through bog and down into the valley, when to my relief a red light flickered in the distance which signaled another check point.

Although we undoubtedly lost time during the night we were still moving well, it was windy across the tops so you certainly didn’t want to be hanging around, which probably was a blessing in disguise as it kept us moving. It was a relief to finally reach the road for the final two miles and to know that we had successfully made it across the moor, we arrived back to the school after 17 hours and 13 minutes of running and it was a lovely feeling. We were given our certificate and stitch badge for making it to the end and then it was back to the Travel Lodge for a hot shower and some Z’s before the award ceremony the next morning! 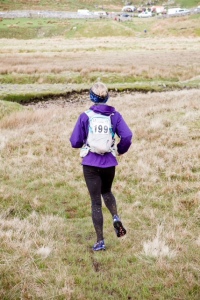 Farewell Fellsman! Until the next time…

I felt very proud to have completed the Fellsman; it is a tough race but every bit worthwhile. The organisation is fantastic, making the experience so enjoyable and although I was worried about my navigation I think you will always be ok and there are usually people in your sights, unless of course you are super speedy at the front! I will definitely be back to do it again, but not this year…..

This website uses cookies to improve your experience while you navigate through the website. Out of these, the cookies that are categorized as necessary are stored on your browser as they are essential for the working of basic functionalities of the website. We also use third-party cookies that help us analyze and understand how you use this website. These cookies will be stored in your browser only with your consent. You also have the option to opt-out of these cookies. But opting out of some of these cookies may affect your browsing experience.
Necessary Always Enabled
Necessary cookies are absolutely essential for the website to function properly. This category only includes cookies that ensures basic functionalities and security features of the website. These cookies do not store any personal information.
Non-necessary
Any cookies that may not be particularly necessary for the website to function and is used specifically to collect user personal data via analytics, ads, other embedded contents are termed as non-necessary cookies. It is mandatory to procure user consent prior to running these cookies on your website.
SAVE & ACCEPT