The Fellsman » Our Supporters » The North Face® » Fellsman training has started…sort of??

Fellsman training has started…sort of??

Sunday 25 January, 7.45am, the annual Long Distance Walkers Association That’s Lyth event is due to start. The event begins in the market town of Kendal, on the edge of the Lake District, and follows a 24 mile scenic route, mostly off road, through the Lyth Valley. Over Cunswick Scar, through to Crosthwaite, up Whitbarrow Scar, dropping down to Witherslack then a final climb up Scout Scar before descending back into Kendal.

This will be my fifth time of doing the event, which is testament to what a great event it is. Being so early in the year, and so soon after the festive season and a break from running, I’m always thankful this is technically a walkers event. The event does however attract a mix of walkers and runners; from the super speedy fell runners, to the social walker with their oversized rucksack, then the in-between category which I fall into, the runner / walker (runner on the downhill and flats and walker up the steep hill bits). 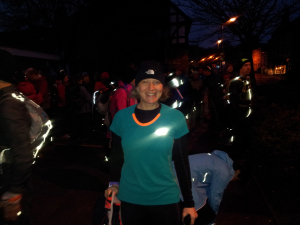 I was joined this year by Richard and Rob, unfortunately the fourth person who should have been along on the adventure, Wendy, was still recovering from recent leg surgery. It was still dark when we turned up to register but plenty of people were already there sorting out last minute kit choices and having one final breakfast before the off. Kendal isn’t the warmest of places in January and the forecast was for cloud and rain so I was glad to have a few layers under my Infiesto ¼ Zip that was helping to keep me warm. At 8am there was a surge in the crowd and we were off, a blur of 300 people making their way through Abbot Hall Park and over the bridge to cross the river Kent. As the event is made up of runners and walkers everyone is quite quickly spread out, although for the first few miles you can still see the long snake of people making their way up the first hill of the day onto Cunswick Scar as most people adopt a steadier pace.

We had decided to take things fairly easy at the start, this was Rob’s first time of doing such an event, actually his first time of running, unless you count the two four mile runs he did the previous month! Training is so overrated! Although there are three checkpoints along the 24 mile route it isn’t marked so you have only the provided written instructions to follow and the people in front of you, which you convince yourself look like they know where they are going as they have a map out??

There seemed to be a general lack of enthusiasm from Richard and Rob, or maybe I just had enough for all of us, or more likely it was because they realised I was going to talk to them the entire way round and wouldn’t be sharing my rather large stash of sweets! 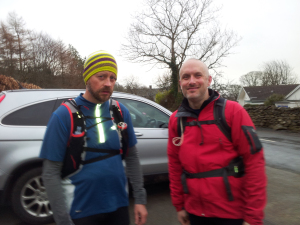 Richard and Bob, at the Crossthwaite checkpoint.

First checkpoint reached at Crossthwaite and the rain was mostly holding off. Quick re-fuel on the home-made cakes and sandwiches and off again heading towards Whitbarrow Scar. Everyone was quite spread out now, some deciding to stop only briefly at the checkpoint, while others made themselves comfortable at the tables inside to tuck into a plateful of food. The walkers might take longer to get round but they certainly have a good time along the way at all the cake stops!

The weather had given up being nice to us shortly after leaving the checkpoint and the drizzly rain set in along with the mist that seemed to be stuck over Whitbarrow Scar as we started the long climb to the top. Walking is definitely allowed on this bit. Rob was still being amazing on what was really his first run, and Richard was keeping us regularly updated on which bit of his body was currently hurting, although none seemed to be affecting his running as he lead us into checkpoint two at Witherslack. The rain didn’t seem to be stopping so on with the waterproof, which thankfully packs down really small and is super light so wasn’t taking up much room in my bag. It’s kept me dry and warm on many adventures in some of the worst conditions in Scotland, the Alps and Yorkshire to name a few.

The third checkpoint is only about three miles away but is the only section of the route I’m not really a fan of as its mostly on road, but it’s definitely best just to run and get it over with and hope the knees and hips hold out! It was only a brief stop at the Levens checkpoint as the weather continued to be grim and the aches and pains count from Richard and Rob was growing, but we were still moving at a good pace despite all this and the end was most definitely in sight.

Back on familiar territory, up the last few hills over Scout Scar, before we reach the road again and a well-deserved final mile run all downhill to reach our previous starting point of that morning. I was one big smile as we pounded the soggy pavements and splashed our way to the end, handing over for the last time our route card which was exchanged for a printed out certificate with our names on congratulating us on our completion. 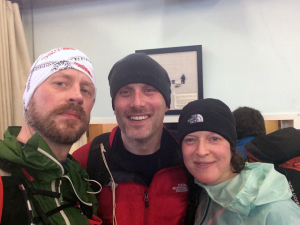 I gave the boys a massive hug and a huge well done, especially to Rob whose transformation from non-runner to runner had all happened that morning! Their enthusiasm seemed more directed towards the post-race feed of never ending soup and rolls, but I ignored their lack of excitement at the fantastic day out we had just had and made them pose for a photo.

Any thoughts of persuading my fellow That’s Lyth running companions to enter the Fellsman with me would be a little optimistic to say the least, but it was nice to have some company on my first proper ‘training’ run. I’ve no doubt that Richard will be navigating me around the Lake District trying to get me fit and making sure I don’t get lost over the next few months before the Fellsman, but think it might be a while before Rob joins us again after the text he sent the day after his running debut ‘I hurt. It’s your fault. I have nothing more to say.’

Luckily there was a smiley face at the end of the text, unluckily for him I think he did amazing and I need all the help I can to get me fit enough to the Fellsman start line, so his running days might not be over just yet!