The High Peak Marathon is a 42 mile overnight team race which follows a high level route around the Derwent Watershed in the Peak District and takes place in the middle of winter. Teams of four must navigate their way between checkpoints across typically rough and trackless terrain, making this event a serious test both in terms of endurance and perhaps most importantly, navigation at night. It’s definitely a race for the purists – simple in concept but very hard in reality – and it’s a well-established classic early in the fell running calendar.

I snapped up a last minute opportunity to join last year’s winning team, Flipper’s Gang, joining Stephen Watts, Jon Morgan and Stephen Pyke to try and deliver a remarkable 10th race win for team captain, Stephen Watts. You could almost say that the race is an ‘art’, of which Mr Watts is an undoubted master; it was certainly impressive to see him in action.

After a long week at work, and an equally long Friday afternoon rush hour drive from the south coast, it felt like I’d been through the mill even before arriving in Edale for the race start. Maybe that was a good frame of mind to be in, feeling a little battle-weary??

Amongst the four of us we had plenty of experience in different areas and a combination that seemed to work rather well despite minimal preparations, which consisted of a few group email exchanges the week before and an hour together in the village hall at registration. Pace it sensibly and make sure everyone keeps eating; that’s our top secret race tactics officially revealed!

Another unique aspect to HPM is that teams are set off at one minute intervals, generally in reverse order of speed based on the previous year’s result. We therefore started last, at 11.46pm. There is certainly some advantage to starting at the back, being able to control the race with everyone else in front, but it also makes the whole thing rather tactical as to when it’s best to make your move to take the lead.

We got into the swing of things very quickly, and I soon learned how this team works. Stephen puts his head down and leads the way, the rest follow in a train, and you don’t stop to tie your shoe lace or you will be left in the mist in the middle of nowhere. Fine with me, I don’t like messing around either.

It was mild-ish and clear on the easier first section to the east of the course, but as is usually the case with the HPM, it got a bit more fun for the middle third across the infamous Bleaklow. If you don’t know it, a boggy moon-scape is probably the best description. There aren’t really any features to help with navigation, and certainly no paths on the ground to follow. The deep ‘groughs’ (peat channels) make it impossible to pick a straight line, and indeed have a habit of throwing you off at a complete tangent. The mist quickly descended as we reached that section, running straight into a strong head wind and sleety showers passed through intermittently. At times the wind was a real menace, almost forcing a stop to running, but in reality that would never really happen with Mr Watts leading the charge. Battle back, we did, and through those mentally difficult sections before first light our navigation was pin-point accurate, as we overtook the last few teams to take the lead before crossing Snake Pass. There was then a slightly more nervous final section of 10-12miles when the visibility remained poor, and we were all feeling a little weary, so became worried that teams might be gaining on us. It was an interesting change in mindset from feeling in control when not in the lead, to running on adrenaline when in the lead. 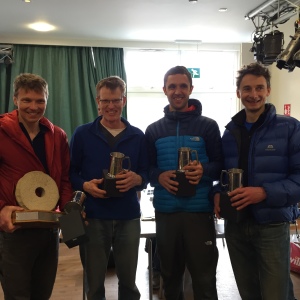 Across Kinder there was enough light for the head torch to be switched off for the first time in 7+ hours, although the murky haze of the night seemed to linger in my vision making it feel more like I had spent the night in the pub, rather than on the hill. I wish!

We all relaxed a little on the final few miles along Rushup Edge and back to Hollins Cross, now comfortable that we had it in the bag. There was hot stew and gallons of tea on the go back at Edale Village Hall, so we then all sat around sharing memories of a great night on the hill in a haze of tired satisfaction. Stephen had bagged his 10th HPM victory, which is quite some achievement when you understand what’s involved. 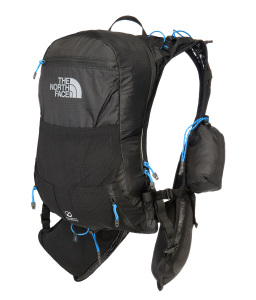 Kit-wise I was pleased with my choices. I ran the whole race in a single hybrid base layer and Alpine Project jacket on top, along with a pair of GTD running tights. I was slightly too warm to start with, but just right for the cold and windy middle third of the course without having to mess around adding layers. With ‘pit zips’ it meant I was able to control body temperature well, and the Gore-Tex Active shell provided the all import weather protection in the wind and sleet to stay safe, but also light. I ran in the Ultra Guide shoes with their brilliant deep lugged tread, and the FL Race Vest was plenty big enough for water, food and emergency kit, and as comfortable as ever. Other than a couple of cups of squash at Moscar, I carried my own food in the form of Trek bars and gels, and probably only consumed around a litre of fluid in total – not enough really.

Thanks to my team mates Swatts, Spyke and Jon for the opportunity to join them, and for sharing a memorable night out on the hill.