The Fellsman » The Event » Points to Observe on the Route

Points to Observe on the Route

As much of the Fellsman route is on private land, access has to be negotiated annually.  A number of the landowners insist, as a condition of the continued use, that entrants follow a particular route on certain parts of their land.

For the most part, entrants plot their own route from one checkpoint to the next, however the instructions detailed below MUST be adhered to when navigating the relevant sections of the route.  Failure to do this may lead to the landowner refusing access to the event in future years – this has happened in the past!

Although the following information is correct at the time at which the handbook goes to print the organisers reserve the right to apply additional restrictions as requested by the landoweners. Any additional information will be conveyed via the news blog prior to the event and will be announced on the weekend prior to the start. We advise you to check back regularly for any updates.

When approaching HILL INN, do not use the lane that passes the post office near Low Hill.  Keep to the right toward the checkpoint, which is situated by the metalled road to the north east of the Hill Inn public house.  On leaving the checkpoint, follow the road in a south-westerly direction and turn first right onto the metalled farm track, which leads toward Whernside.

On leaving the WHERNSIDE checkpoint, do not take the direct route down Blackside Pasture, but stay on the east side of the ridge wall (keeping the wall on your right hand side) until it can be crossed using the stile at NGR 724789.  Proceed down High Brown Hill Pasture, using the marked gateway at NGR 714791.

Once through the KINGSDALE checkpoint, follow the flagged route to the gate in the top corner of the field.  Cross the next large steep pasture diagonally, using the stile in the top left-hand corner to cross the ridge wall.

From GRAGARETH checkpoint heading along the ridge to Green Hill and GREAT COUM checkpoint, it is best to keep the ridge wall on your right-hand side to avoid problems crossing intersecting wall junctions.

From the checkpoint at GREAT COUM, descend in a north-westerly direction to the relocated FLINTER GILL checkpoint, in the far corner of the pasture. Note – shortly after leaving GREAT COUM checkpoint the ground steepens considerably and there is some difficult ground to negotiate if the optimum route is not found (including scree, tussack grass and drainage gullies). This can be avoided by a decending traverse to the right of the escarpment to meet the stone wall which can then be followed and used as a navigated “handrail” to FLINTER GILL checkpoint.

After the FLINTER GILL checkpoint continue down the track, turning right at the end.  Turn left after 400m, into another walled track and follow this into Dent village.  Turn right onto the main road which leads to the checkpoint at Conder Farm.

When leaving the STONE HOUSE checkpoint, go back over the road bridge and up the walled track which passes under the viaduct.  At the end of the walled section, marked by a beacon at NGR 794862, turn left and head in a northerly direction to GREAT KNOUTBERRY.  After visiting the checkpoint, return to the beacon before proceeding to REDSHAW. On leaving the beacon the marked Pennine (may be Dales Bridleway) Bridleway at NGR 792861 takes a higher route towards Redshaw and avoids some boggy lower ground.

Prior to the REDSHAW checkpoint, pass through the gate at NGR 794848 which will be marked with a flashing beacon.  Cross the field diagonally and use the stile in the opposite corner by the checkpoint.  When leaving the REDSHAW checkpoint, follow the south side of the fence to SNAIZEHOLME. When leaving SNAIZEHOLME checkpoint, follow the fence line (keeping the fence on your left-hand side) for 1 km to join the Ribble Way path. Pass through the gate on your left and follow the path contouring around the rim of Grove Head to join the metalled road (Cam Road).

Between the DODD FELL and FLEET MOSS checkpoints, use the route through two gates, (at NGRs 851837 and 855836), following the track eastward to the road below FLEET MOSS.

When leaving FLEET MOSS, use the road to the valley bottom, as per the map below. Join the Dalesway at the point of your choosing but no later than Deepdale. At Yockenthwaite Farm there will be markers taking you on a track up the hillside to a latched gate (YOCKENTHWAITE – NGR 909791) where you can make your way to MIDDLE TONGUE. 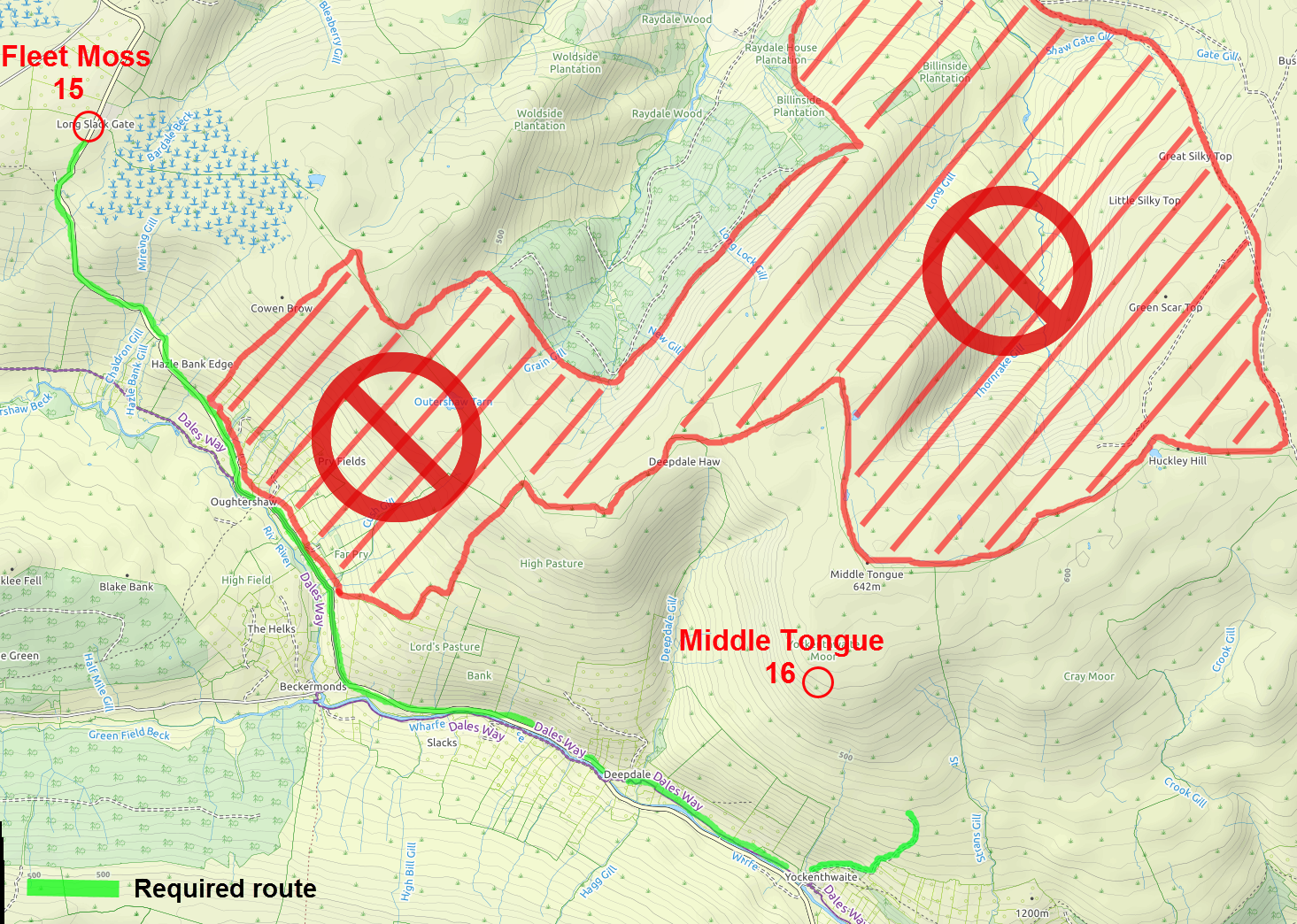 The MIDDLE TONGUE checkpoint (NGR 906803) has been lowered south to Yockenthwaite Moor to avoid an area we do not have permission to use. Entrants must stay south of the district border when leavng FLEET MOSS, taking a bearing towards High Pasture and not towards the edge of The Grainings.

HELLS GAP  (NGR 936 818)  has a more southerly location to avoid the same ‘No Access’ area as MIDDLE TONGUE. Again all entrants must stay south of the district border, heading over Cray Moss and not Stake Moss. (See map below)

After the CRAY checkpoint, use the gate at NGR 9475 7981. Continue SE until you intersect a gritstone path which ascends directly to the checkpoint at BUCKDEN PIKE.

When leaving the BUCKDEN PIKE checkpoint, stay on the west side of the wall, using the new gritstone path to the Polish Air Memorial crossing to the east side of the ridge wall and follow it to NGR 965776 to a hand-gate in the wall.  Turn right through this gate and head in a southerly direction toward TOP MERE.

On leaving the CAPPLESTONE GATE checkpoint, keep the wall on your right-hand side as far as the junction with the green lane, once on the lane then bear left after the gate, following the flags and beacons on the footpath to YARNBURY.